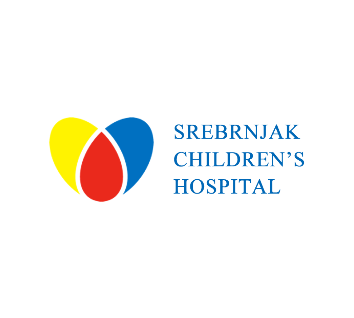 Srebrnjak Children’s Hospital (SCH) is a tertiary healthcare provider and scientific research organisation registered with Croatia’s Ministry of Science and Education. Since its establishment, SCH has become a central institution in paediatrics in Croatia, and a regional leader in the field of paediatric clinical pulmonology, allergy and rheumatology. It became the Croatian Ministry of Health’s reference centre for clinical allergy in children, as well as a member of the Global Allergy and Asthma European Network. In 2015, SCH participated in the establishment of the Scientific Centre of Excellence for Personalised Health Care, supported by the Ministry of Science and Education. In 2016 it became a member of the Croatian National Telemedical Network and in 2019 it joined the Centre of Competence in Molecular Diagnostics.

SCH is involved in basic and applied biomedical (translational) research, primarily in the area of chronic non-infectious diseases in the paediatric population. It aims to identify early risk markers for the development of chronic respiratory diseases (asthma, COPD) as well as epigenetic mechanisms influenced by a change in the environment and in lifestyle.

In 2014, funding has been secured for the realization of the Centre of Competence for Translational Medicine (CCTM), which is currently in its implementation phase. The centre, being part of SCH, represents a modern research platform and a novel paediatric hospital concept, implementing approaches of translational medical research and personalised (precision) medicine, in cooperation with a wide network of collaborating health, research and educational institutions in Croatia and the European Union. scientific advisor, pediatric specialist, and subspecialist in allergology and clinical immunology. She is the Head of the Department of Pulmonology, Allergology, and Immunology at the Srebrnjak Children's Hospital in Zagreb and the Head of the Reference Center for Clinical Allergology in Children of the Croatian Ministry of Health. She is a lecturer and course leader at the Faculties of Medicine at the Universities of Osijek, Zagreb, and Split, at the Faculty of Food Technology and Biotechnology/University of Zagreb, and at the Faculty of Medicine of the Catholic University of Croatia. Dr. Turkalj studied in Austria, the United States, and Denmark and collaborates with several national and international universities and institutes. She is a member of the Scientific Council for Anthropological Research of the Croatian Academy of Sciences and Arts, a member of the Croatian Competitiveness Cluster for Personalised Medicine, Head of the Scientific Center of Excellence for Personalized Health Care, and The Center for Competence in Molecular Diagnostics at Srebrnjak Children's Hospital. She's a leader (PI), researcher, and national coordinator of several international and national scientific research projects and a project leader of the Centre of Competence for Translational Medicine (CCTM) at the Srebrnjak Children's Hospital. Her areas of interest are pathomechanisms of asthma and allergic diseases, specific immunotherapy, immunodeficiency, food allergy, and others. is Head of Research at Srebrnjak Children’s Hospital. He obtained his MD in 1987, his MSc in 1991, and his PhD in Biomedicine in 1999. He is an Occupational and Sports Medicine Specialist with 15+ years of experience in the field. He was and is leading a number of national and international research and translational projects and is a consultant in the development of hospital (HIS) and national health information systems (NHIS). He has co-authored more than 100 scientific publications and is a mentor to students in postgraduate courses as well as a supervisor of several MSc and PhD theses. He is a lecturer in a number of undergraduate, graduate, and post-graduate courses at several academic institutions in Croatia and gets often invited to present at international congresses and symposiums. He is an acting member in various expert organizations (EAACI, ERS) and a principal investigator in a variety of clinical trials. is an Associate at the Department of Translational Medicine at Srebrnjak Children’s Hospital. She obtained her MSc in Molecular Biology in 2010 and her PhD in Biomedicine in 2019. She has more than 10 years of experience in biomedical research (molecular allergy and immunology), the innovations sector, and in monitoring and organizing clinical studies. She has participated in several national and international research projects and has co-authored more than 10 scientific publications. She is an Assistant Lecturer in the course “Basics of Paediatric Allergy” at the University of Zagreb, School of Medicine (in English). In 2016 she received the prestigious European Respiratory Society Short-term Research and Training Fellowship and is an acting member in several expert organizations (EAACI, ERS, IUAES, IRS, CROSBIH). She is also a reviewer for several international scientific journals (PLOS ONE, Asthma Research and Practice, MDPI publishing group).

is an Associate at the Department of Translational Medicine at Srebrnjak Children’s Hospital. She obtained her MSc in Experimental Biology in 2011 and is currently a PhD student at the University of Zagreb, Faculty of Science. Her scientific focus for the past seven years has been on immunology. She has experience in a variety of laboratory techniques, but her main focus is on the application of flow cytometry and high-performance liquid chromatography in biomedicine. She has participated in several national and EU research projects and is the author and co-author of 8 scientific papers and more than 20 posters and oral abstracts presented at different international congresses. She was the recipient of a fellowship to participate in the European Association of Allergy and Clinical Immunology (EAACI) Congress in 2017 and 2019 is an expert assistant and web support officer at the Department of Informatics at Srebrnjak Children’s Hospital (SCH). He obtained his MSc degree in Biotechnology (Bioprocess Engineering) from the Faculty of Food Technology and Biotechnology, University of Zagreb in 2011. He is responsible for the maintenance of SCH’s website and the preparation of project proposals with national and EU funding. He has participated in several national and international research projects and is the author and co-author of several scientific publications. is a dietician and the Head of the Department of Hospital Nutrition at Srebrnjak Children’s Hospital. She obtained her MSc degree in Molecular Biology in 2009 and her MSc in Nutrition in 2012. She is currently enrolled in a PhD program in Nutrition Science at the Faculty of Food Technology and Biotechnology, University of Zagreb. As the Head of the Department of Hospital Nutrition, she is responsible for the delivery of hospital meals in accordance with the HACCP system and national nutrition standards for hospital patients. She is part of a multidisciplinary clinical hospital team where her tasks are nutrition counseling and sample preparation for double-blind, placebo-controlled food challenge (DBPCFC) and oral immunotherapy (OIT).  She has participated in several national and EU research projects and has co-authored several scientific publications. She is a member of several expert organizations (EAACCI, ESPEN, HDND) and a leader of the Food allergy working group in HDND. Her main area of interest is infant and early childhood nutrition, especially with regards to food allergy, and dietary measures for food allergy prevention.